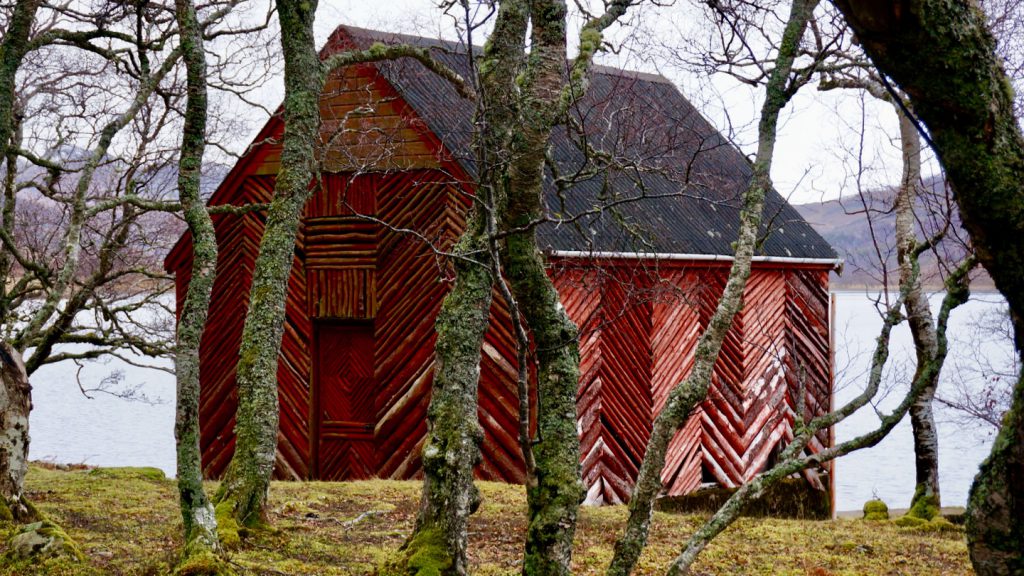 I had a nice breakfast with Bubbles who was by now becoming my hiking companion. She had turned up at the same B&B the morning before.

She was having some problems back home and was considering discontinuing the Trail. I sensed she needed someone to lean on so I offered to go for a coffee after.

I had a nice chat with the B&B owner while I waited and learnt he was once a marine biologist. In fact he had played a pivotal role is establishing Scotland’s early salmon farming industry.

Bubbles and I had lunch at he pub which turned into fiah and chips and a Guiness. We parted ways as she needed to call home, so I restarted the trail at around 14:00 with good weather. Just 8C and cloud, no rain.

It was a bit of a hill start out of Ullapool. Opting to take a more scenic hill path instead of the boring quarry track marked on the map. There is a bit of trend with the map makers choosing tracks and roads over paths which I am learning is not always that enjoyable. 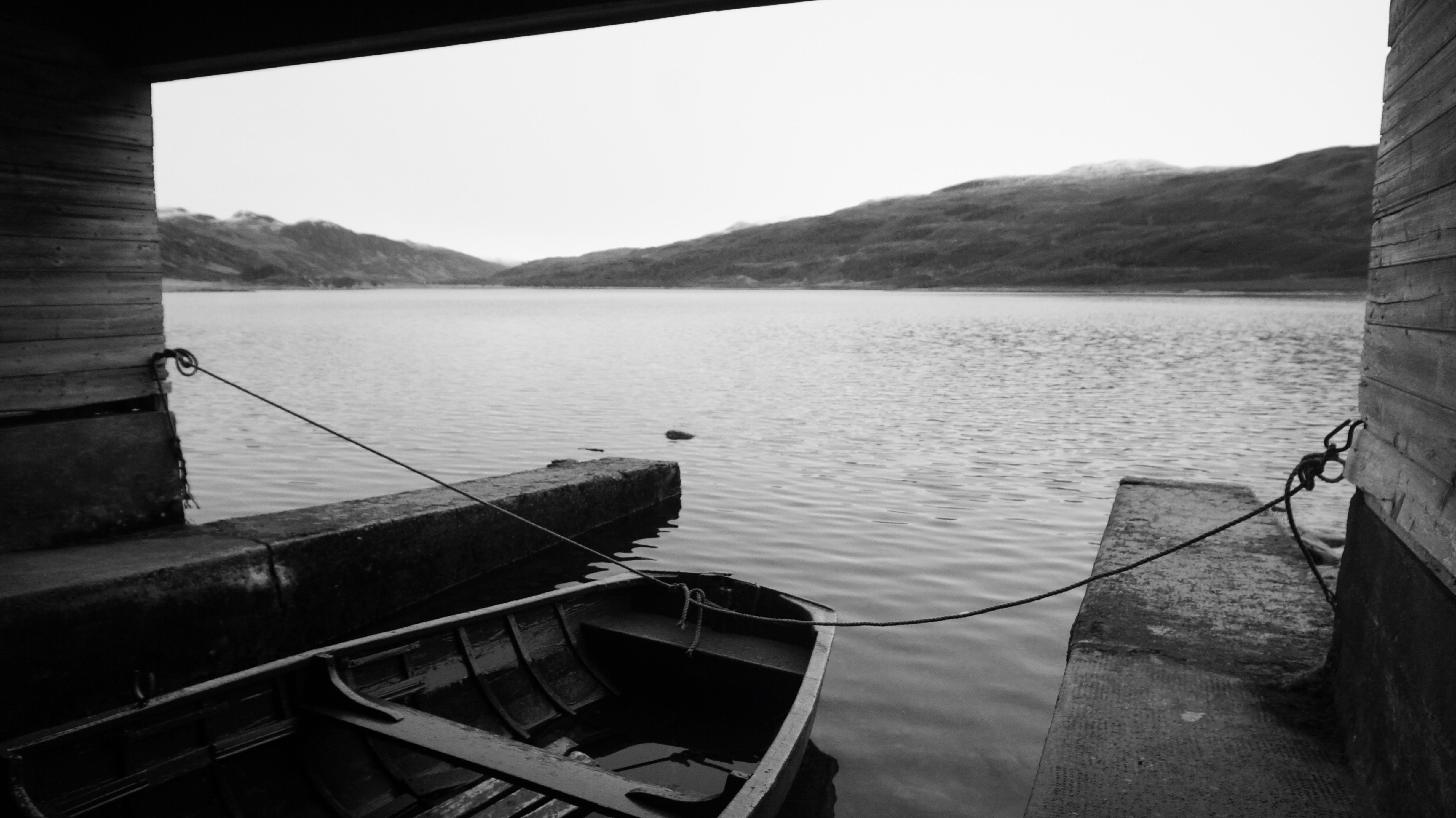 A four hour walk through Glen Achall, which really widened out into lush green pasture, I got to Knockdamph Bothy at the end of Loch Damh. It was now 18:00 and getting dark.

I poked my head around. This was about the creepiest place I had seen. With a creepy four poster bed upstairs with original mattress. I half expected a ghostly hand to land on my shoulder any moment, so promptly left.

It was now getting much darker. Luckily I knew the schoolhouse Bothy was just another 7km away. That’s about 80mins walk if I was reasonably quick.

I walked 30mins and wow, did the light really disappear. There where no stars or moon, just a gloomy smothering of clouds above. My head torch was pretty dim at best. I opted for a low powered torch to conserve battery life.

I walked quite a bit. The track steadily became rougher and I turned my ankle at least five times. Luckily I now had bought a replacement trekking pole in ullapool so now injuries where taken. But I slowed from a speedy 6kmh to about 4kmh to be safe.

The path was about my only handrail in this darkness. I had no horizon, my sense of orientation was completely gone. I checked the map, no deviations or junctions. I walked and simply entrusted the path to help me reach the destination.

It did go on forever, and at one point I experimented by turning my headtorch off to if I could see anything. Actually I could make out the two lines of tyre tracks but not much else. I kept it on.

About 40mins in, which was about 3km. The path ended and there was just blackness before me. I poked it and realised it was an enourmous puddle, but my torch was not powerful enough to see the end of it. I sheepishly skirted around it and found what felt like the track.

About 60mins in, I was met with a ford crossing. I was quite worried as I now hate ford crossings. But luckily the water was only shin deep and I was skipped through it so quickly the water didn’t seep into my socks.

The path from here disappeared and was more like a grassy lawn with very little definition. But ahead I could make out a compressed area of grass that felt like a vehicle had passed it sometime ago and I took a gamble on it. I led to an area of ankle deep mud, but I could see two large boards next to it that must have been used to help vehicles cross it. I round the corner through the mud, past what looked like two large flood barriers and found the track.

At this point it was very dark.

Every few minutes I could hear footsteps galloping around me. I realised that I was passing deer and spooking them.

I walked through the darkness and the track became nice and grassy. I went over a perfectly spherical mound with short manicured grass that looked like fur. It was as if I was walking over the belly of an enormous teddy bear.

I saw a little light in the distance but couldn’t determine the source. Perhaps it was a road light.

I decided from this point to pace count. The Bothy was about 2.2km away precisely. Just next to a bridge. I had two small fords before that. I didn’t need to pace count but I practice this perishable skill, particularly at night time. It can save your life when lost in the dark and cold, and is surprising accurate.

I am lucky, my pace count is 50. For every 50 paces I know I have passed 100 metres. (You count every other step, so two steps is exactly a metre for me). I pace counted until I found the bridge.

This is useful. With no landmarks you cannot orientate at all. You have no sense of how far your have travelled or how fast because of a lack of reference points around you. Disorientation can quickly set in, and therefore fear. This can lead to hopelessness and ultimately making mistakes, such as wandering around in the darkness getting hopelessly lost.

The key to pace counting is to find a positive landmark and direction (heading), then your pace count will tell you exactly how far you have walked. If you do it properly it is dead accurate.

Another indicator at nighttime is sound. You can hear landmarks around you which give you a sense of direction, such as rushing water: a river, a burn or a waterfall have distinctly different sounds. You can tell the speed and volume of water just by listening to it. I could tell the river next to me was about 4-5metres wide and moving fairly quickly. Burns sound more like a trickle, its a pleasant part of soundscape around here. Waterfalls sound more crashing and violent.

You can also hear roads. Depressingly, you are never more than 6miles from a road anywhere in Britain. So if you walk in a straight line, eventually you’ll probably hit one. Once you even find a small track, it will eventually lead to a main road, and therefore relative safety. Power lines are also useful as they typically connect towns and villages taking the shortest route.

My pace counting wasn’t necessary because of the track. I had a clearly visible path. But there were deviations and junctions that I could precisely reference on the map. Having this certainty really speeds things up, saving you the feelings of doubt and fatigue.

I found the bridge and the white silhouette of the schoolhouse was across it. Nobody was home.

It’s a pretty cool Bothy. It really was a school, and the desks are still here. There is a chalkboard on the wall and the Bothy Association have done it up really nicely.

But someone had written “Neil Smith Cape Wrath 2017” in big bubble writing on the chalkboard and I felt that was a pretty self-congratulatory way to commemorate yourself.

He wasn’t only just over half way! He hadn’t even completed it yet.

I set up my bed and ate two bagels and an entire block of Boursin Soft Cheese. I was pretty tired but satisfied I’d made the extra miles this day. I wanted to get Cape Wrath over and done with by now.

The wind howled all night as storm Doris was coming in. I could hear the masonry rattling in the walls and must have slept in three hours.