I woke up at 5am atop of the spur. It was the only place I could have camped. Truthfully, I didn’t wake up because I didn’t really sleep that night. The wind was howling around me and it was raining buckets.

The water was beginning to permeate my bivvy so I just gave up and started to get up. First light was at 7am so I did what I could to prepare for it.

When I say first “light” it’s still dark, but just less dark. I peek outside. Everything is grey. Human nightvision is in greyscale. But because of the weather, it’s all grey anyway.

The hills around me look like enormous molehills. I feel like a caterpillar in a very soggy chrysalis, looking through black blades of grass, through grey mist, to grey mound shapes, with grey on grey on grey. It’s a wet day, the first I have had on the CWT. I knew it was going to happen eventually.

I get up and pack up by 7:30. I have all my waterproofs on which made me feel slightly invincible. I haul my pack onto my back and start cutting down the hill to the glen. I walk heavy footed, forcefully. I intend not to slip. I do only a handful of times. It was fine. Get up, war cry, get going. 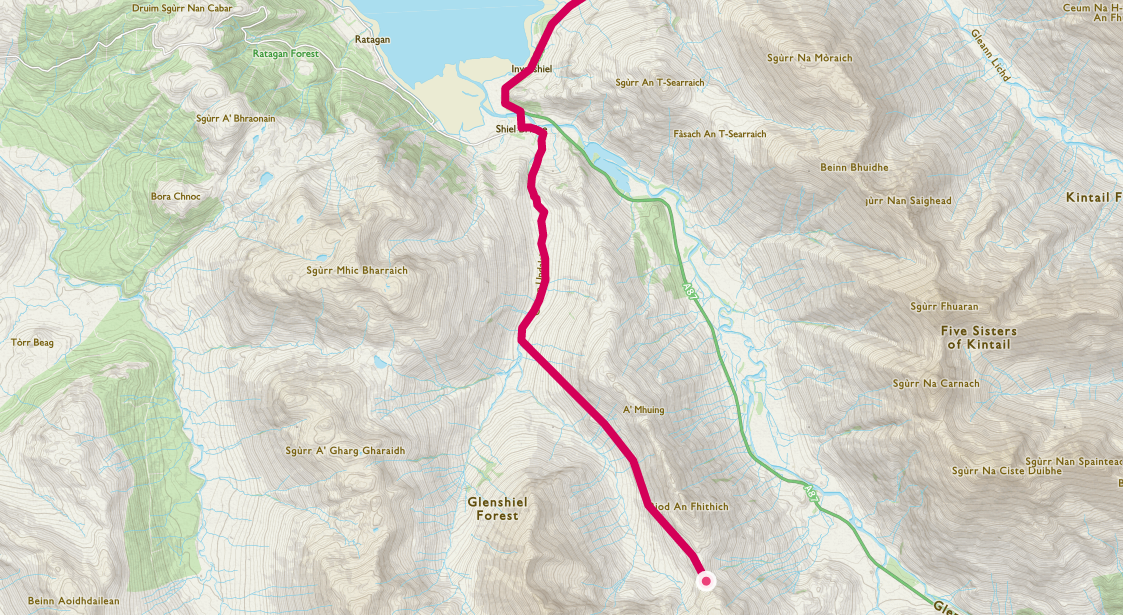 An hour and a half and I have walked a straight line off the hill and down to the river, which is gushing. Not only had thaw began, the rain had kicked in after a week-long dry spell. The rivers now were in full spate.

I stomped through squelchy heather and moss for another hour. Basically drawing straight lines, ploughing through obstacles, and the rain.

Anyone seeing me from a distance would probably think I was furious.

I now look ahead at my map to check for upcoming landmarks. I see I have to ford the river ahead. Great…

The river is foaming and frothing. Its white water rapids. Eight meters at the narrowest. Eighteen at its widest point. Depth unknown. This is too dangerous. I check the map again.

I see a second crossing is instructed after the ford, back over to the same side I am on already! I think how pointless that ford would have been, had I made it. And how useless these guidebooks are for instructing it. I choose to stay on my side of the river and walk the bank instead, even though it’s bog. Completely doable without needing to ford the river, and without risking anything, only wet socks, which are incidentally wet already.

This is the first major ford of the Cape Wrath Trail. A less experienced walker may not think twice and try it, I thought, and I quickly lose faith and respect to the guidebook.

End of the glen, and I am walking to Shiel Bridge petrol station. I don’t know why but I am thinking about a tin of Tenants Super. I get to the shop at 9:59am and I have to wait one minute before the cashier can sell me alcohol. I forget Scotland has an alcohol restriction before ten o’clock. It makes me feel embarrassed.

He asks me if I am doing the Cape Wrath Trail. I say yes. He shakes his head judgingly and gives me my change. I eat an entire pack of chocolate digestives on his bench outside without offering him one.

Skip ahead several hours and kilometres.

I am now climbing a steep hill to Falls of Glomach. This is a beautiful part of the walk. Full of water. Water everywhere. Water gushes out of every orifice of the hills around here.

When I get to the top I make the pass at the bealach with the driving wind and rain funnelling me through it. I open out into what looks like Stannedge Edge in the Peak District. a brutal moorish part of the Peak District which is perpetually covered in rain and mist. It’s just the same dismal view here. Horrible. The ground below is a puzzle of burns which are now more like rivers and paths which are all basically burns. Water runs everywhere. It’s peat bog soup. 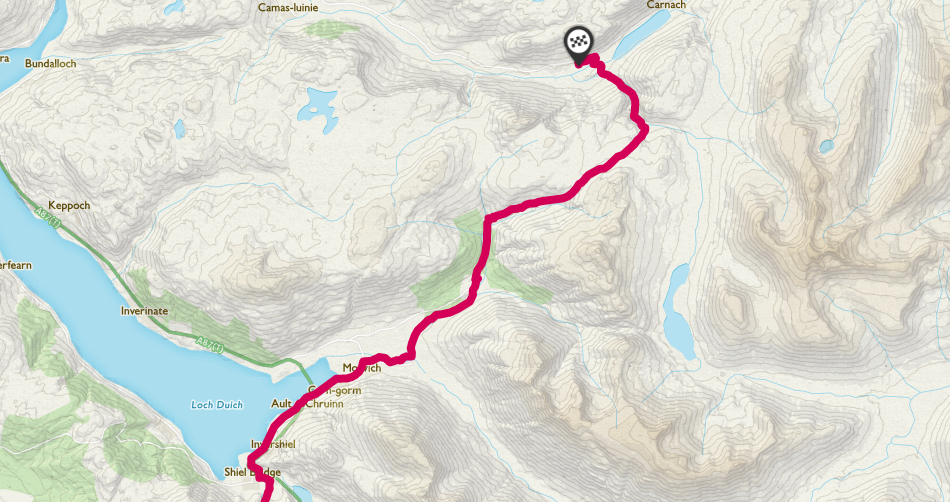 This is the top of a hill but is basically a flat moorland for 1km, so I run most of it. I was so bored of trudging uphill I wanted to change pace. As it’s Day seven I am now feeling fit. My 12kg backpack is now basically part of my body. It’s quite fun running though puddles. Splish splosh.

I run off the end of the moorish part and then atop of a small spur overlooking what can only be described as a devastated, ravaged landscape.

Here, whatever was a path here is now spewing water. The ground I see below me is convulsing and rushing in all directions. And top it off there is a river as fast as a bullet train at the end of it. I realise this area of land is an enormous funnel, the water being pumped off into a one-hundred meter deep ravine. This is the highest waterfall in Britain, it’s incredibly remote. It looks like a warzone. The path down looks like one of those “wet n wild” funslides, except more of a cannon than a slide, and much less fun when you get to the end. I approach with caution.

I cannot fully describe how enormous and terrifying the Falls of Glomach are when the river is in full spate. A sign read “take great care”, I heed the warning but wonder why there is no path or handrail here.

I take what I think is the path, which is winding and slippery. It’s 20m down until I realise it’s a dead end to a viewing platform. I have to go back up. But before that I look at the Falls and I whince at the enormous power of it. The noise is impossibly loud. It’s like the sound Norse Gods thumping enormous anvils. The landscape is jagged and wet, pressurised water has cut directly into the rock a vertical ravine the shape of an enormous thunderbolt. There is no bottom to this thing. You can’t actually see it.

I climb shakily back up to the top to rethink the route. I am wet-through by now. Visibility is very poor. I actually pray for a sign to help me find the way out.

I search around, and it is only the smallest of cairns – just two rocks balanced upon each other – that gives me a clue to where the path is.

I add rocks to the cairn and make it several times larger so that the next walker does not make the same mistake as me.

On the otherside is a dead drop.

There are two points here where you must cross two smaller, subsidiary waterfalls. I did this on my hands and knees, trying not to skid of the rock face to my doom.

When I come down off of that shelf I relax. A nice wander down a grassy knoll. I relax too much and slip forward into a face-plant. I am now hurtling down the slick grassy hill toward the ravine, until the momentum and the weight of my pack spins my body into a second forward roll. I land on my knees, overseeing the edge of the ravine. Dripping wet, shaking. I break into tears.

I balled it. Completely broke down at the thought of sliding down that hell hole. I somehow felt as if I was crying out of shock but also joy, and exhaustion. And just because there wasn’t quite enough waterworks here already.

It was a horrible walk down, but when you do get down it gets worse. You now have to ford a river. Yes, this river is worse than the one I saw at the beginning of the day. It crashes an writhes around huge boulders, foam and whipping. I have completely broken down at this point. I am at a loss. It is getting dark, it’s just ten minutes walk to the peaceful glen, no turning back, where would I camp here anyway? I’d probably die of exposure.

I stare at the river I must now cross. No bridge, no stepping stones, just crashing foam on rock. I edge upstream to find a safer ford but there is none. I have to do it before it gets dark. I edge my bum into a large boulder and dip my toe in, feel for a floor beneath this mess of foam. The force whips my leg away and I’m pulled onto all-fours. I’m face down in a rapid, clawing though water. I grasp an enourmous rock and pull hard to get up. I am halfway there. I slide over a rock, dripping wet in cold water. I take another plunge and climb onto the boulder and the edge of the river. I am freezing wet and cold. I see no path along the river edge, just grassy cliff, so I scale that with my arms and legs. It’s a scramble, almost vertical. I have to use bouldering skills to get back down to the path. Below me is a rapid which would crack my head open and drown me in a minute.

I actually make it. I hobble down the path to the glen, crossing two bridges. Shaking and wet from head to toe. I am sobbing.

I set up camp in the woodland. I lay out my bivvy on dry bed of pine needles. I change into slightly less damp clothes. I try to eat a hot meal. I fall asleep.

The next day I wake up and I am warm. It has stopped raining and the birds are singing. An estate manager pulls up in his Land Rover and gives me a lift to the end of the glen. My faith in Scotland is restored. It’s another beautiful day on the Cape Wrath Trail.