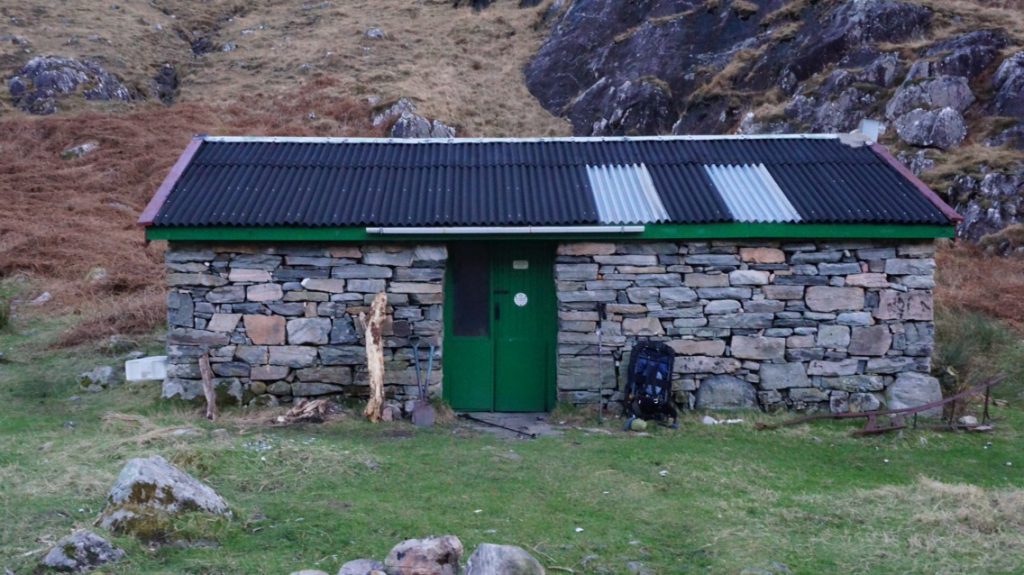 I had slept at Sourlies Bothy (soor-lees). The wind had howled around that tiny hut in the sea loch all night. At around 40mph it whistled down the chimney and rattled the cutlery. It did not perturb the bothy mouse, who was noisily looking for my food. Funnily enough it was his noises that kept me up all night, not the wind. I was worried he might find my food bag.
I could describe the beauty of Sourlies Bothy, but you would have to see it for yourself to appreciate it. A remote mountain shelter at the end of an enormous 12km sea loch. Not accessible by any road, only boat, or a day of walking. The enclave is flat, full of a maze of marsh, and fringed with sea weed. Amongst these are mussels, cockles and periwinkles. Of which visitors have collected and cooked over the fire before me.

The short path from the loch to the Bothy is littered with bright blue mussel shells, much bigger than you’d imagine. As you walk the line of the loch you smell sea air, and hear seagulls. When you open the Bothy door you smell the woodsmoke of past visitors. You immediately feel warm and safe —the bothy is perfectly sized, not to big or too small. Comfortable and womb-like. 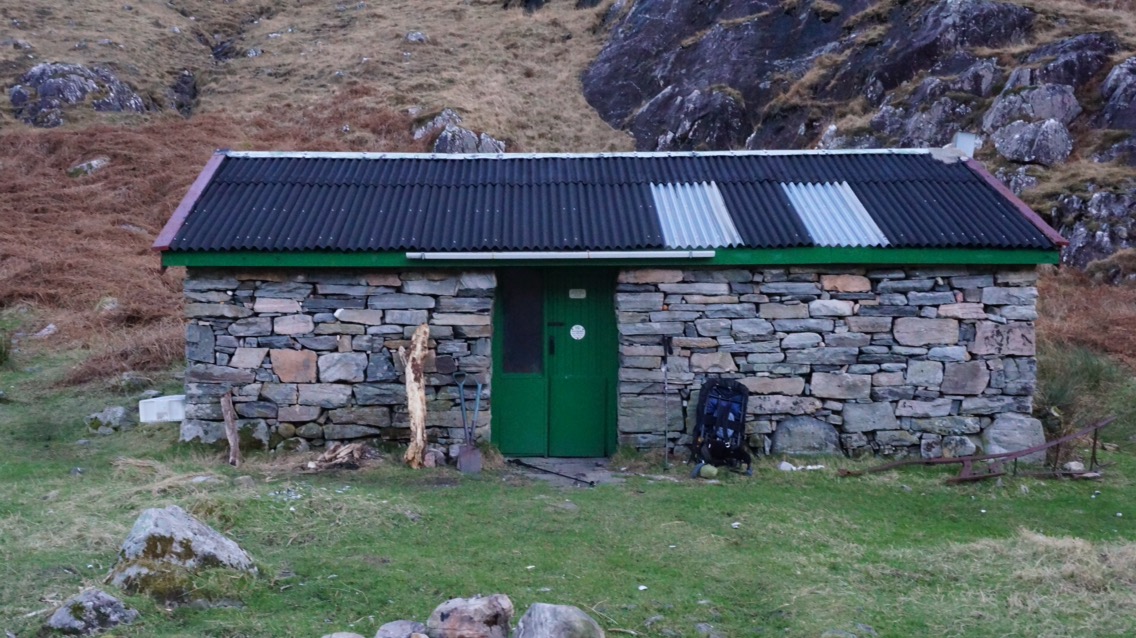 The hike over to knoydart was simple enough. Because the tide was in I climbed the promatory above, giving me great views of the glen and the loch. The mountains reflected in the water like brass. 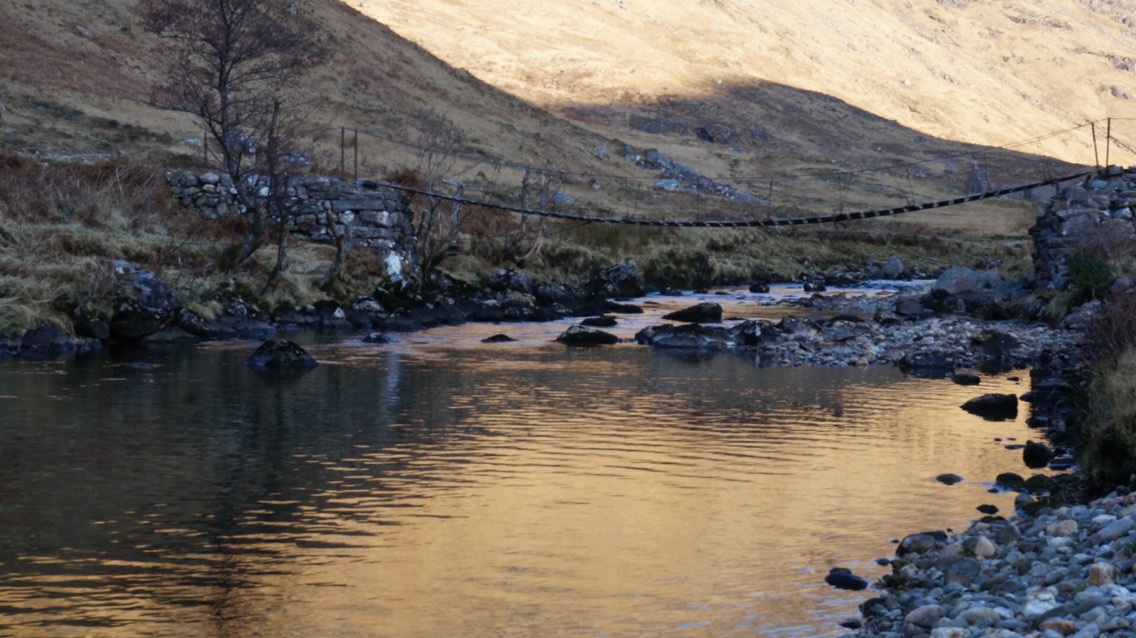 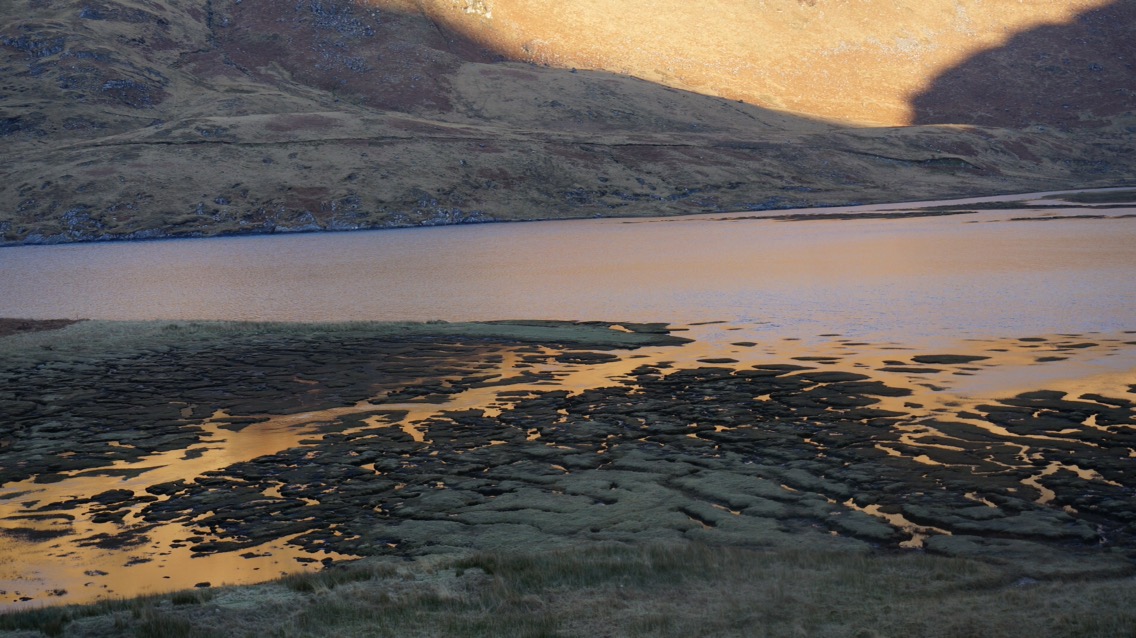 Over to my right was what can only be described as a field of peat marsh that must be crossed to climb the next bealach into Glen Meadail. A bealeach, as far as I can tell is a mountain pass, or a saddle between two mountains.

The marsh was 500m to cross, but it felt like 1000m. There were waist deep bogs here, and a few unobservant steps would land me in serious trouble.

The trick to cross peat bogs is to remain focussed and observant. Set your direction on a fixed landmark and walk in much of a straight line as possible. Crossing boggy land can be done quickly, and you can remain dry if you know what to look for underfoot, so constantly look beneath you and up at the horizon to maintain your reference point. The natural tendency is to wander, which can end you up further into the bog than you started at.

The safest ground is where it is dry, with good drainage, high ground, rocks, dead yellow grass will lead you like a golden path. The danger areas are red, where the dead grass has become saturated with water – it turns reddish-brown. Tall, green “soft reed” is an indicator of wet ground, but usually safe enough. Green spongey moss will indicate a higher degree of wetness, but usually only toe-deep. Don’t tread on anything black, it will not be firm enough to walk, it will be waterlogged peat. Grey, fluffy peat is dry enough but could be soft and sloppy. Sedge grass is like walking through a minefield and it is easy to twist and ankle. It grows in tall, dense-rooted tussocks, some over a foot tall, that feel safe to step on, but will collapse with any weight. You will slip off and at the worst twist an ankle and at the least land in the channels of wet bog that it obscures beneath. I fell in a waist-deep gully, luckily it was dry.

The best practice is to keep moving fairly quickly, using trekking poles as antennae to prod and examine the terrain. Always distributing your weight with them. Look for the dry, dead grass and you’ll be fine.

I crossed the peat marsh in just six minutes. It was good timing, but hard work. For me, to walk the equivalent on a flat piece of road is four and a half minutes. I try to walk quickly, at a sustained pace, while being observant, trying to decode the landscape. Hillwalking is a sport of knowing what to look for and how to move. It is a kind of dance between you and the landscape.

The ascent at Carnoch was reasonably steep, winding, but well trodden. It was not too difficult, but it was exposed with frequent stops of water being necessary. It took nearly an hour to make the climb to the saddle between Sghurr Sgeithe and Meall Bhasiter. But at the top of was greeted with a view of Inverie 12km at the end of the glen.

I practically skipped down the hill with excitement.

I met a couple halfway who where walking in the opposite direction to Sourlies and onto Glenfinnan. They were not expecting to meet anyone, and neither was I. It was a nice sign I was closer to civilisation again.

The track widened from a quad bike track to a land rover track and meandered down the glen. There is an estate Bothy here that is locked.

I had heard the one-two blast of a shotgun in the glen. So there was some game shooting going on. But the stalkers where invisible in the hillside.

I stopped by the river and bent over to fill my water bottle. Then the camera incident happened.

I forgot I had left my camera inside my chest pocket, and as I leant over it dropped in the river. I scooped it out immediately, with the reflexes of a bear catching salmon. I took it from its case, removed the battery and wiped it down. It was not as wet as I expected, but would probably be affected by seepage.

I am now waiting for it to dry out and hoping for the best.

I walked past the awe-inspiring crucifix on the hill, backgrounded by a perfect blue sky. As I entered the village I saw an elderly estate worker, sat against a tree, savouring the sunshine and the view of the forest.

He nodded to me and said hello. As I walked down the path I took a left into the woodland, the ‘Knoydart in a Knutshell’ walk as it had been called. I got a sense of this place just though that. 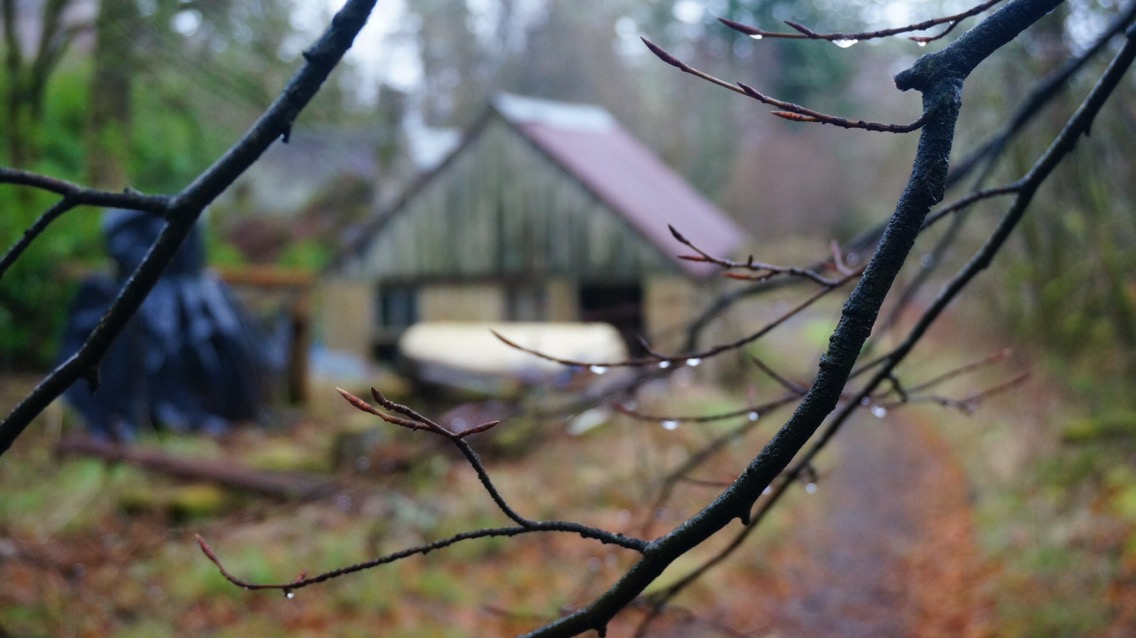 Everything was at ease here. At every glance was something of point: A hand-carved ropeswing; a formation of rocks made, and then left by someone in a artistic mood; a rusty old tractor outside a saw mill, the coat of the millworker still hung up on it, covered in dust from weeks ago; and beside the mill a bundle of freshly sawn fence posts; beside a tree, a brand new pink bicycle that a child had left there trustingly, and a wall that had started to be repaired but had been left, even with the tools, mason’s twine and new stones sitting beside it. All half finished projects left to be completed another day. 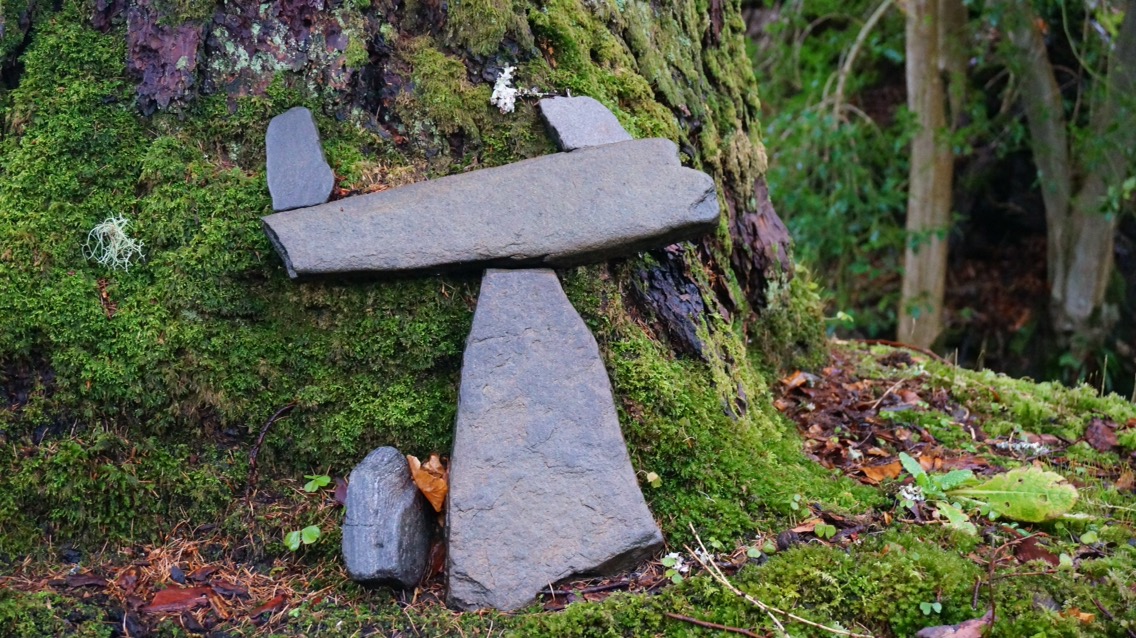 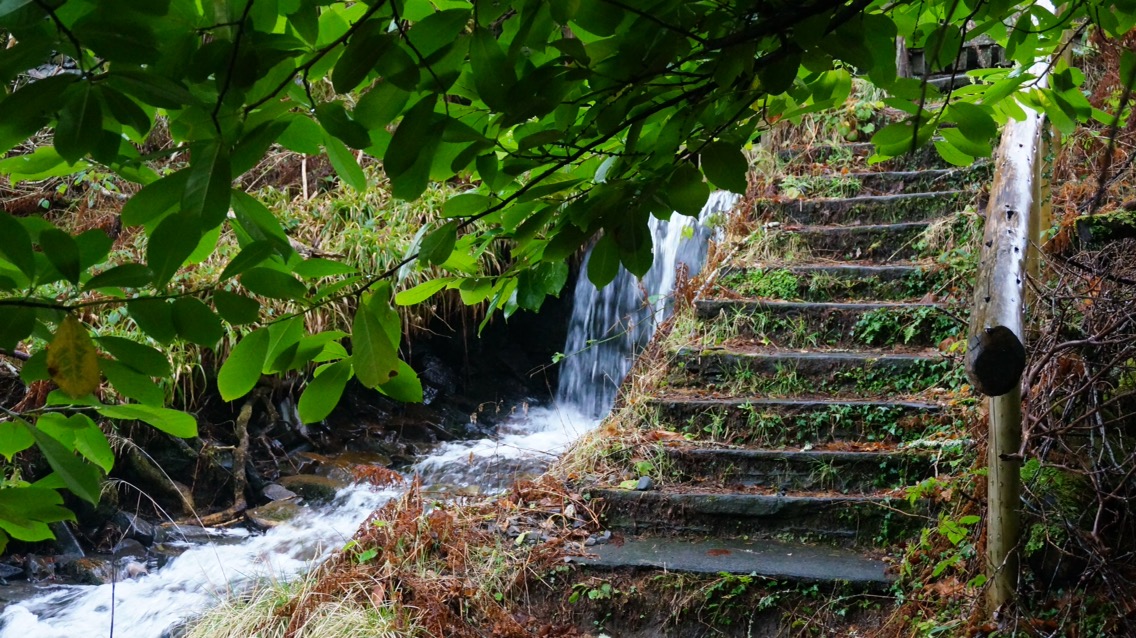 Walking down this path was like walking into a Beatrix Potter storybook. Full of the signs of wild-life, yet human-abscence. The animals and trees could go about their own little lives while the humans took a break. A feeling of calm, absent-minds and trust. A busy community, busy doing nothing.

I entered the lane, half expecting Peter Rabbit to slip across it in his little blue coat.

I walked into the bunkhouse there. I thought this was the old farmyard, or perhaps the old butchery for the venison.

I was greeted by two dogs, one very large and one very small. Both friendly and kind. Then I was greeted by Christine, who was not a dog, nor a Beatrix potter animal, but a very friendly lady who who showed me my room, the kitchen and the living room. She helped me track down my food parcel which I had sent there from Fort William. We found it hadn’t been delivered yet – 48hr postage means 72hr postage in the highlands, so I stayed and waited another day.

Day 4: Rest day in Inverie
I walked along the coastline, which seemed vast and empty. There is a feeling of being on an island here, it is very remote, and the post office, cars are all from another era. This is not an island but a peninsula, the single private road here does not connect to any public main roads. It is an entity unto itself, a single carriage to allow things to be brought to and from the ferry point at the pier. Because the road is private, the locals haven’t bothered getting MOTs. I saw a land rover with its door missing, cleverly replaced with a sheet of transparent Perspex, cut to fit. Another car had bin bags gaffa taped over the front windows. One car, the worst of all, had no bumpers and two flat tires, yet looked as if it was still being used to get around. Indeed, I saw it being driven around later that day.
There is a school here – an eco-school. Everything here runs off the communty’s private grid. A green hydro-electric system gives them a surplus of electricity. So much that there are signs in the hostel asking residents to not bother switching the lights off.
There is a post office and a community hall. The church is now a private residence, which I found a little sad. Churches are often good places to go and reflect after a long hike. So I did this on the beach instead.
I spotted limpets here, mussels and cockles so I foraged a few and cooked them in the hostel kitchen with spaghetti and a few leftovers I found. My food parcel still had not arrived from Fort William so I was being resourceful.
Christine, the warden, invited me for a cuppa tea and we had a long chat about the history of the island: how it was home to some 2,000 tenant farmers who were evicted in the clearances to make way for sheep grazing, an industry that then flopped and the aristocratic landlord (who was also a nazi-sympathiser) went bankrupt. Sometime in the 60s the community got enough money to buy the estate in a modern day “land-grab” and they turned it into their own. Now it is a small but thriving community in the remotest part of Britain, perfectly functional and sustainable. It is a model for us all.
Tonight I am resting before Day 5, 6 and 7. There will be no bothies on these days, and it will be raining. This means wild camping and trackless navigation in Knoydart, which is a really tough place to be in your own.
Five years ago I would not have attempted this, I would have been far too inexperienced in the hills. I would have stopped here.
I have learnt from five years of coming to Scotland and wandering how to read the landscape, how to decode its patterns. But in these few days of sustained, unsupported hiking I have realised I have never built a relationship with it, I have only ever been an itinerant. I feel once this journey is done it will be time to build a new life and new relationship, somewhere, with the land.