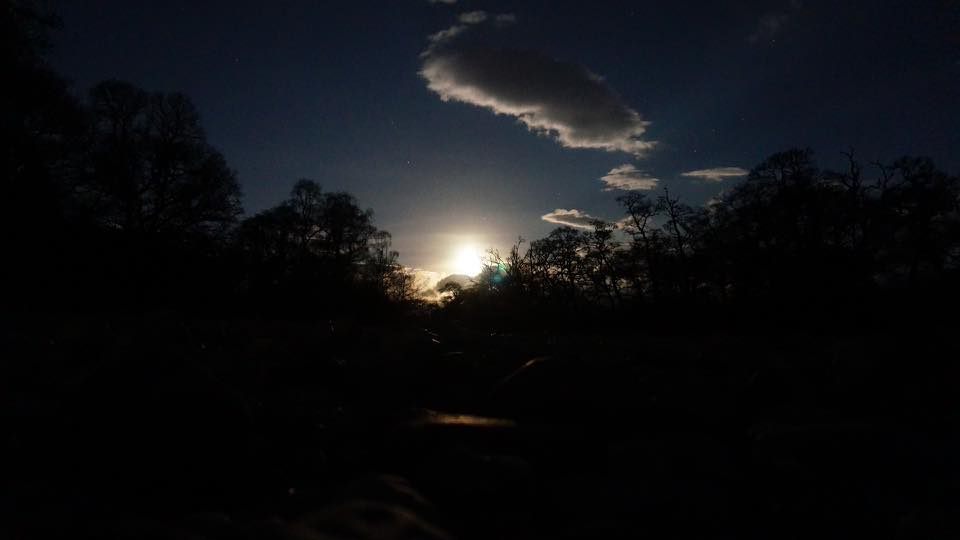 I had slept in Fort William YHA and my planned start was thwarted by a freak tide.

To start the trail to Cape Wrath you must catch a short ferry ride over Loch Linnhe. It should only take about 5 minutes and costs the princely sum of £1.50. But today the winds were up. I arrived at the ferry terminal early, 7:00am, to catch the first chance over there. The boat sat at the end of the hard.

That was the problem. It was sitting, not floating. There was no water.

Two men dressed in heavy waterproofs crouched beside the boat staring at it expectantly. I hesitantly walked down the hard to ask if the ferry was running. They were friendly guys and they seemed quite embarrassed. The boat was beached on the hard and they couldn’t get it off. The strong winds had literally blown the tides away. They said this hadn’t happened in years – in fact it never really happens at all.

I am only a novice kayaker, but I do know that for a boat to “go” it needs is a decent supplement of water. Seeing as there was none the guys told me to come back at 4pm.

I was disappointed. I really wanted to get going and now I would lose almost a whole day.

But this was a blessing in disguise. Fort William is not a dull place to spend a day. I was forced to take it easy, which in hindsight was what I really needed after a long sleepless couple of nights travelling up. I spent the day eating, and with two decent meals inside me I was in a much fitter state.

With walks, I usually cram the day before, eat only a modest amount of calories in the first day of walking, but a decent amount of protein. This is where I will get “trail fit”, by burning down my reserve body fat I get leaner and the protein helps convert mass into muscle. This also means I have to carry slightly less food weight in the bag on the first two days, so I can slowly grow accustomed to the load.

By eating two square meals in Fort William I was starting on a full tank and probably had enough in me to walk for two days without food. I felt fully prepared, mentally and physically.

I returned to the slipway at 16:00 to see the boat bobbing happily over the water. The guys where hauling in the mooring lines to pull the boat towards land. They waved me on and I took a backseat. No fare was required – they said I’d waited long enough, so they waived it.

The ride was less than five minutes. I sat and watched the ship’s dog – a slinky black labrador stuck her head out of the pilot’s door and get excited by the rocking and bouncing of the tiny vessel. Sometimes I think dogs enjoy the same pleasures as humans, but on a much simpler level. As we bobbed over the waves towards the starting line – I was basically on her level.

When we arrived I hopped off the boat and waved goodbye to the friendly ship and her part-human, part-canine crew. The walk had started. I propelled myself ashore, and so I started my walk by magnificently tripping over the boat’s mooring rope.

It was now almost 5pm, so I wanted to get myself to comfortable wild campsite before sundown – which was an hour away. My target was Cona Glen – which to me is where the walk properly starts.

I covered the 9km road that runs alongside the loch shore in around 1.5 hours which is a clean 10kmh pace. When I got to the bay at Cona Glen it was dark and I continued on the road a little too far than needed and ended up on a road bridge. This was just a minor navigational mistake, I soon backtracked and discovered the turning I had missed. This roadway stays on the North West side of the Cona Glen river and turns sneakily off to the right.

I hiked down this smaller road. I felt immediately happy. Gigantic Douglar Firs lined this stretch – the biggest trunk that I measured was 2 metres wide (I measured with my arms) and this spot presented me with a perfect mattress of dry pine needles to lay my bivvy upon. The cona river was trickling alongside shallow but wide, and I unrolled my sleep kit, filled a water canteen and made a powerful brew.

For all the trepidation, anxiety and worry about the elements, especially as I had no previous Winter experience in Scotland, this first night was spectacularly relieving. It was a full moon. The light of it shone down on me like an enormous spotlight. I was floodlit enough not to need a headtorch. I took my first photograph – at night time– which looked more like a sunrise –and I camped in complete comfort underneath the bonnie stars and the giant Douglasses.