Lampers: A night hike and a near miss? 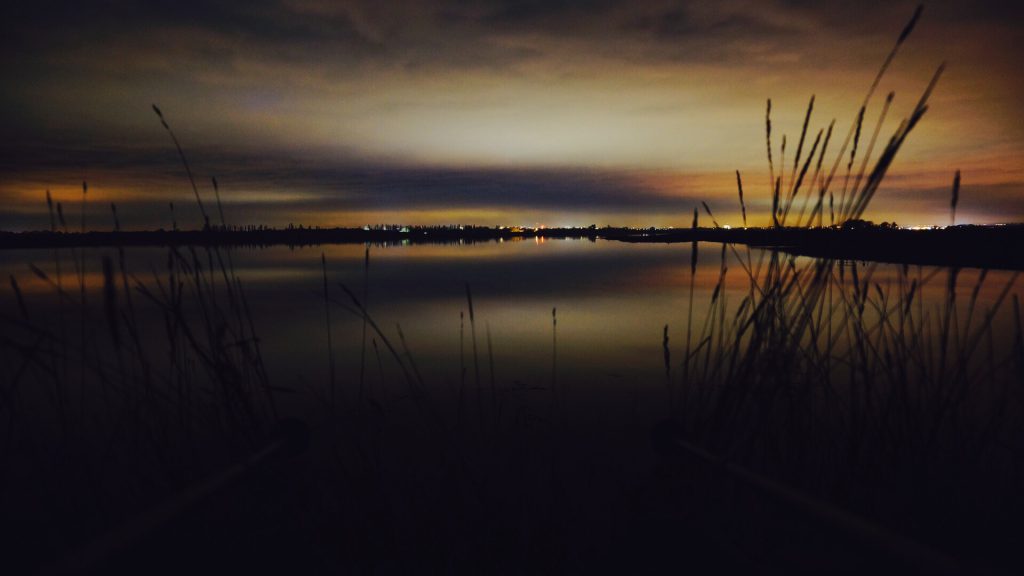 A few hours walk around the River Roach, Essex. I took this photo of the river. It was taken at around 9pm with a 10 second exposure. This is not a sunset, this is light pollution from Southend-on-Sea.
If you look carefully, you can see my walking poles in the foreground.

Around 10:00pm on a very dark January night,  I visited the nearby lagoon where there’s a reserve for water fowl. I hoped to do some night photography. I set up my camera to take some shots. I sat there for a while and watched the birds, waiting for a good silhouette.

Then, over my right shoulder came a piercing, bright light.

I sat down low as the light swept across the field. It was a spotlamp.

The lamp swept right over me, but I’m not sure whoever was holding it had seen me.

I watched the silhouette of three men stalk over the edge of the field, their shadows etched onto the horizon. At their feet where the shadows of three moving objects.

I wondered if they had seen me. Perhaps they were farmers who wanted to scare me off (even though I was on a public footpath).

I circled back around the lagoon. There was a deep bank to walk behind so they couldn’t spot me.

As I walked I heard a dull ‘thud’ sound over my head.

I recognised it immediately as a silenced gunshot.

I ducked down to the ground and hid behind the bank for safety. I heard a man shout a command aggressively, “here”, as if to a dog. Which I realised explained the moving objects at their feet.

A short moment of hiding I realised then these men were “Lamping”.

Lamping is a hunting practice of sneaking out at the dead of night to shoot anything that moves. One man handles the lamp, one man uses the rifle, and the other controls the lurchers. The lamp is shone on unsuspecting rabbits, hares, badgers and foxes, dazzling them. It is an indiscriminate method of hunting – because very rarely do the hunters pause to identify the target. The shooter will kill whatever they see with a scope. The lurchers are then sent to collect and finish off the casualty.

I didn’t know if they had intended to shoot over my head or not. But it was scary, because maybe they thought I was quarry.

I spent two hours hiding behind that bank. I had every right to be there, they did not. The land was not owned by the farmer, but the local Water Company. So they were shooting illegally on private land.

I was in danger, but I had no way of telling them I was actually a human being.

The spotlamp moved around the lagoon and when I walked one way, it seemed to follow me. Perhaps the dogs had picked up my scent and they were tracking me. I felt pretty trapped there to be honest.

I made my escape over a small creek, back towards the river, I knew they couldn’t follow me here because there is only one crossing point, and it was high tide. The route involves walking over a large water duct to get out. I only know this from years of childhood adventures visiting the lagoon.

Once over, I walked and moved quickly, as I was now in open land. The light did follow me, but it did not shine in my general direction, only once, when I was paused behind a tree.

On the way home I thought about the experience. I felt like a rabbit, or a hare. I felt very scared.

I had only heard about lamping, but when I researched it later, it made sense this is exactly what they were doing.

The problem is this is often illegal, and it is unsafe. There have been numerous accounts of people being caught in the spotlights of lampers, and too many near-misses. Just a few years ago a twelve-year old boy was shot dead while walking his dog.

There is a negative effect on wildlife too, because it is so indiscriminate. Badgers are regularly killed, although a protected species. Hares have reduced by 80% in then past 100 years. Neither or these species pose a real threat to the type of crops grown in this area.

You can read about lamping here, Lampers are the ‘thugs of the countryside – The Independent