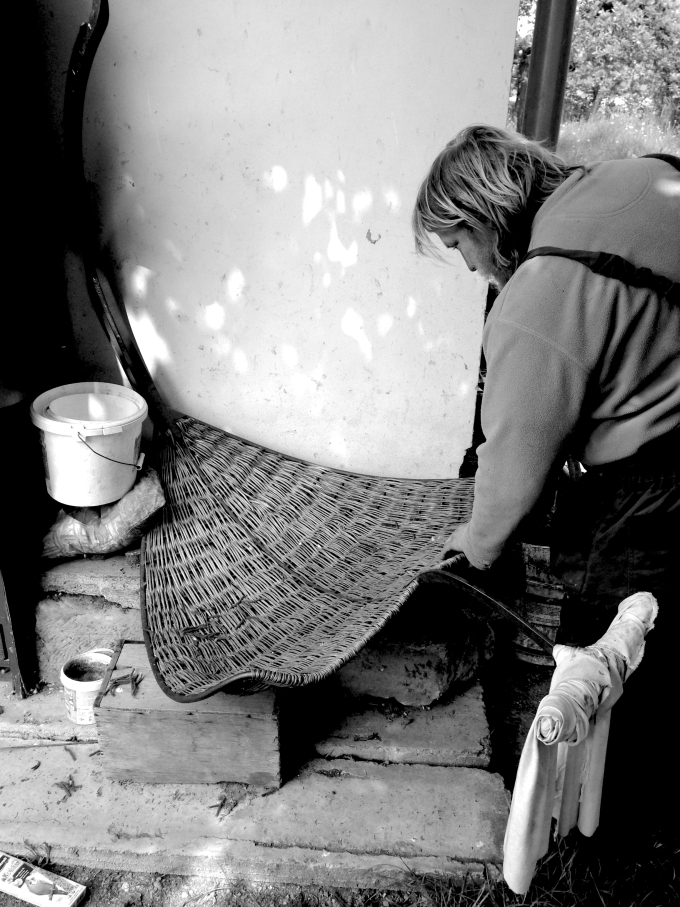 I had decided to do a solo walk of the National Park, which took me through some of the most beautiful woodland I have seen. Half way through this journey I stopped at a campsite. With no one around I decided to pitch my tent.

As I finished pitching my bivvy I heard a cheerful voice behind me.

“You are tall, but your tent is short!”

I turned to see Michal, the campsite manager. Michal had long blonde hair, a gingery beard, twinkly eyes and was wearing dungarees. I shook hands with him and introduced myself. I still don’t know how he knew I was English but I suppose word travels quickly in this part of the world.

I soon discovered that Michal managed the site and was also a blacksmith. He once lived in Scotland for two years where he tried to sell his work – but ended up working on a pig farm. He also lived in Cornwall for a while, where he made a living picking daffodils. “50,000 a day” He said with a sigh, motioning the picking of each tiresomely. Because of this, his English was pretty good. Also, so was his sense of humour.

I had completed a blacksmithing course that year in London, and so we had something in common. Without hesitation he invited me to visit his workshop the next day.

In the morning I got out of my tent, I made nettle tea and waited beside my tent stretching my back – he was right, it was short.

Michal arrived in his red Skoda (a fine Czech car) and drove me to his house. His car had sheepskin-lined seats. Such style in the height of summer.

He showed me his workshop, which he made many jokes about being messy. It was in fact very messy. But exactly how I would expect.

It was an old cattle shed. Here, he showed me three anvils, small medium and large. He showed me the forge and the flume. Here’s “my pile of axes”, where I must have counted around a dozen. I wondered if this man was part-viking.

He showed me his lump hammer, he explained how he favoured it’s weight and how it bounced off the metal, saving energy to lift. Usually blacksmiths work as a pair – one to hammer and one to shape the metal with the tools.

As there was only one of him, so he showed me his technique for holding the metal and hammering it at the same time. He lifted his leg coquettishly and then straddled the anvil. Then with the enormous lump hammer, he gestured a hammering motion between his legs.

I didn’t stop laughing laughing at this scene, this man was pure comedy.

He showed me a few other things: a beautiful gate he was being commissioned for with circular glass panels, an ornate window grill, and a large circular frame he was making for a yurt.

By the door, I spotted some chainmail hanging up. I asked him if he’d made it.

“No. This was brought to me by a French blacksmith friend of mine, he left it here, and never picked it up.” He lifted it told me feel it’s weight. It weighed a tonne! “Yes”, he said, “And this one has no sleeves, so it’s the summer model!”

Outside he showed me a bucket of old axes. Yet more axes. He showed me a “Goose Wing Axe”. It looked the sort of tool a Viking would be proud of, furthering my suspicion that he was indeed a viking.

The goose wing had a broad blade, about 10″ wide, the handle was crooked-bent, but it was intentional.

Michal motioned the action of using it, swinging it down low by his right side. “The bend is here to protect your legs”, he explained, “The axe is used to make round tree trunks into square beams”. He pointed to the rafters of the house, “these were once done using a goose wing axe”.

At this moment I realised this tool must be incredibly efficient. More efficient than any modern saw. And with riven wood, you get stronger beams too. 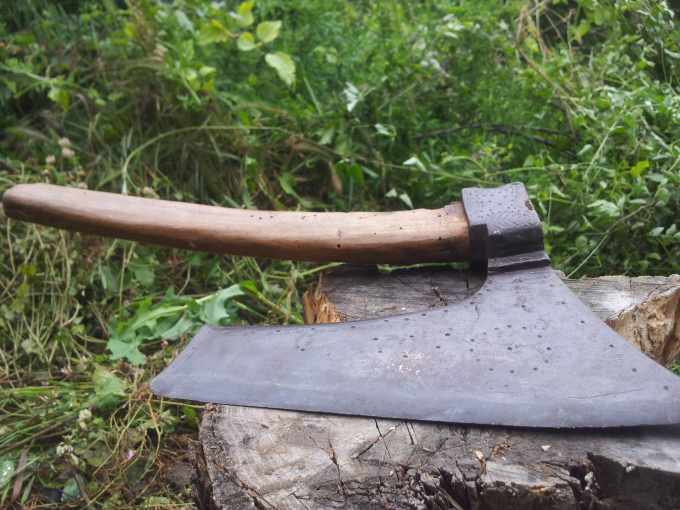 Michal explained that he saves many tools from the scrap yard. He showed me a beautiful and ornate cast iron stove that he’d rescued from there. It was perfect, and yet it was going to be melted down.

He showed me some cast iron gates that he had saved. They had stunning craftsmanship. “They’re around one-hundred years old, worth £2500. I couldn’t let them go. I have had them over ten years but still do not know what to do with them”, he lamented.

We left his “messy workshop”.

Round the back of his shed he had some ex-battery hens that he had rescued. None of them had feathers, some of them had only just a few tufts on their backs. “They’re traumatised, but relieved to now be free range” he said, as we watched them pecking around his yard. He’d only had them a month and he said they had recovered dramatically already.

He had small plot of land, enough for a few goats which his wife milked. He had a small mound in his back garden, which he told me was an old medieval wooden castle. He showed me some pottery that he had dug up there. Around the mound was a ditch where the moat had been. It seemed that this area had been a place of strategic value, or perhaps just sought after and therefore it was fought after.

He had a direct view of Trosky Castle, and had set up a hammock there just so he could look at it. 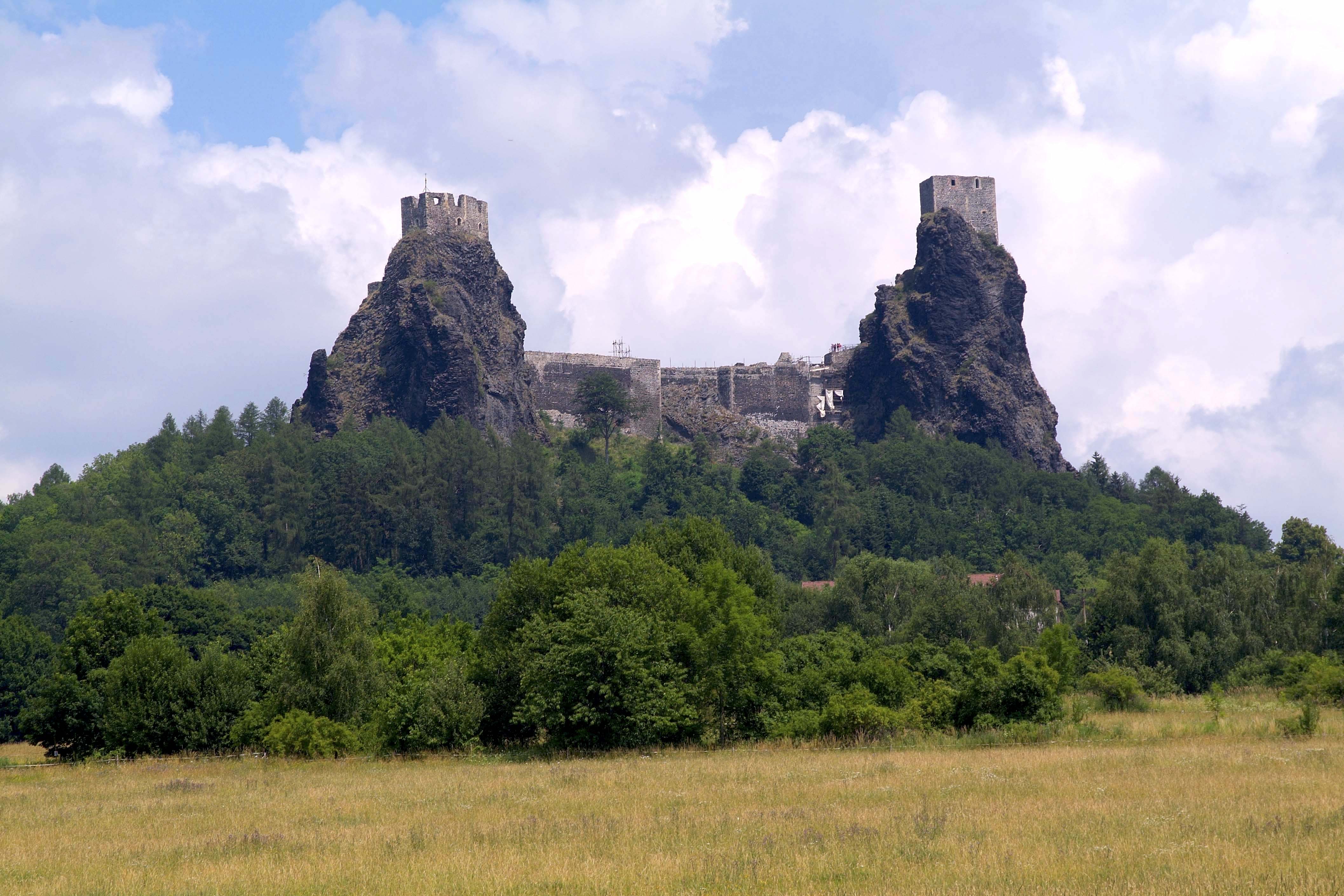 He then showed me a finished piece. A hanging chair shaped like a leaf, and woven with willow. It was a gift for his wife. (Shown above).

After a pleasant visit the blacksmith offered to drive me back to the campsite. We got out and shook hands. I learned his name was Michal. And we agreed that we would stay in touch.